Before embarking on your project, be sure the model you are going to restore does not have greater value as it is. I really can't help much in this decision but a good guide is to check on ebay to see what a restored model sells for against an unrestored in similar condition. For Dinky, all prewar models had 1/16 axles, generally speaking leave these alone as they could be worth more as they are. 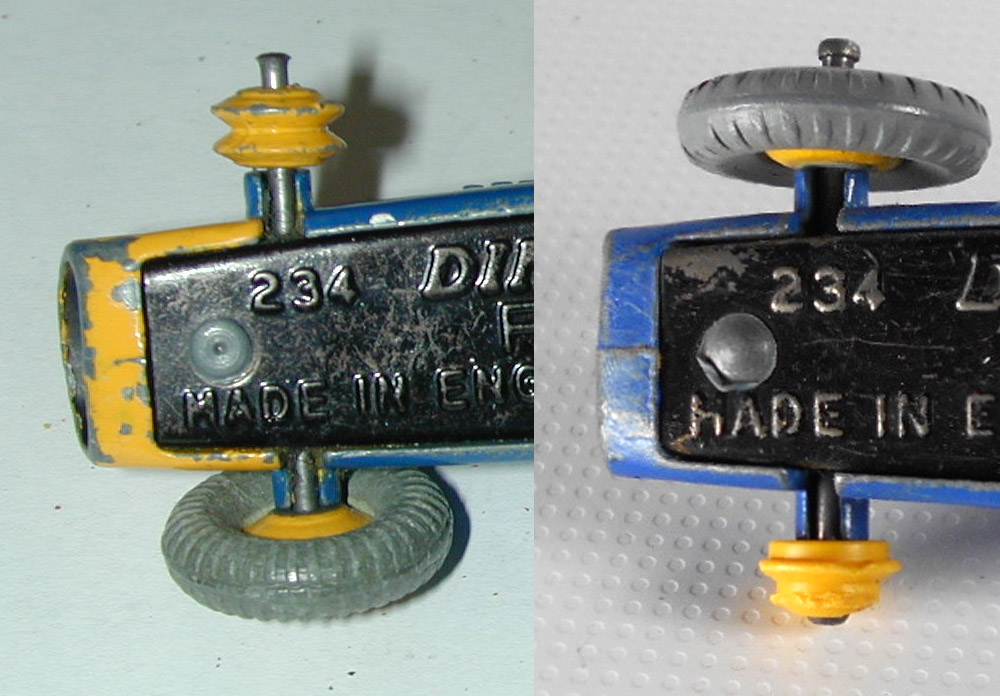 There are many things that you have to consider as unassembling a model varies, but in general, most models are held together by a form of rivet. The early models has a small dimple in the center that makes things a little easier as it provides an anchor for the drill bit. Others are raised and have to be ground flat and punched before drilling. Next decide on the drill bit size. If you are going to be using screws, I use 4-40 screws, you need to drill the first hole using a 5/64 for a tight fit or 3/32 for a loose fit. Others use replacement riviets that closely resmeble the original, in which case 1/8 is appropriate. Drill as far as you dare, frequently cleaning the drill bit to remove chaff. Next a larger bit to remove the head. Don't go too large as damage to the bodywork may occur and remove as little as necessasary. The chassis should now pop out together with axles.

Some models have axles that need to be removed before the chassis is removed. In which case the end of the axle will need to be clipped of with a pair of side cutters.

Windows and other parts, such as seating and driver will no be removed. Some windows may be cracked, scratched, or painted over, don't worry, many can be repaired. The window unit is riveted to the roof. This can be a problem to remove but the same method as above, using an oversized drill will normally work, but take care not to drill through the roof. In some models I have used a grinder, but use with care.